After another hour and half wacky race adventure, we made it to beautiful Toronto.

With only twelve hours to explore the city we dropped off the car and hot footed it to the hop on hop off bus stop. It took us a few attempts and a couple of laps around the block but we made it just in time. It was only 11am and today was not the ideal time to have forgotten to put deodorant on! Yes mother, I’d forgotten the seven Ps. Never one to panic, a quick unscheduled trip to the 7 Eleven put us back on track.

Our first stop in Toronto was the CN Tower. Everyone we asked for recommendations said it was a must see and not one to ignore recommendations off we went. Thanks to our wonderful St Catherine’s hosts, they recommended we booked lunch at the top of the tower. It sounded pretty pricey at $65 but you do get a fancy two-course meal as well as entry to the observation decks.

The food was incredible and it was made even better by the birds eye view of Toronto.

After food it was time to hit the observation decks. As we’d already spent an hour and a half ‘observing’ the city, we headed to the glass floor deck where Scott immediately turned into a wobbly-legged Bambi and stayed well away. Not one to miss an adrenaline rush I headed straight to the glass and took it upon myself to test the Canadian building standards by jumping up and down. Scott was not amused. But as I pointed out, the floor can hold the weight of up to 3.5 orca whales. Personally I want to know how they got the orcas up there… 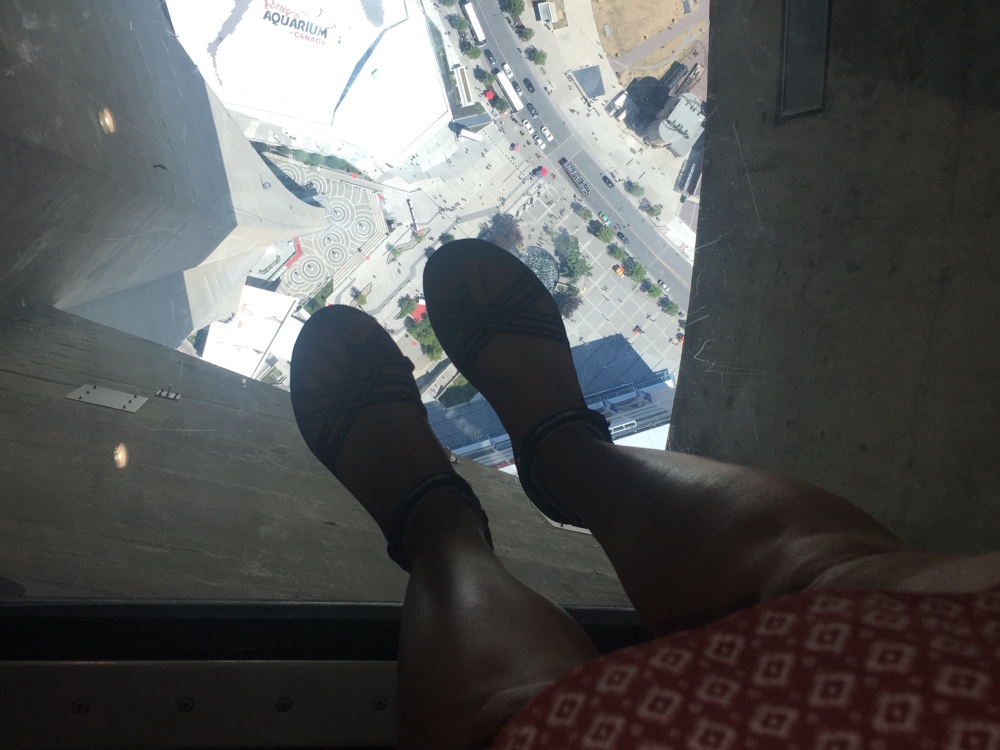 Facts about the CN Tower

• It is the tallest free-standing structure in the Western Hemisphere at 1,814 feet tall (553m).

• The CN Tower is struck by lightning approximately 75 times each year.

• You can see about 100 miles on a clear day from the observation deck.

• The tower was named one of the Modern Seven Wonders of the World in 1995.

• It only takes 58 seconds to get to the observation deck.

The Toronto skyline is one of the most iconic and the best view is from Toronto Islands. A short trip from the mainland, the boat takes you around a few of the islands. As always, no tour is complete without its own ghost story. This time a haunted lighthouse. Does anyone know of a lighthouse that isn’t rumoured to be haunted…?

By the time we walked down Canada’s most fashionable street, Queen Street, it was time to make the most out of our bus ticket and head for the hop on bus again.

Now the problem with being on holiday is not only that you forget what day it is but also any concept of time. As we boarded the bus at 5:15pm, I was blissfully unaware that we’d be spending the next two hours sat in rush hour traffic. Oops. At least we had the worlds most entertaining tour guide. After the fifth song I was hooked and almost asked to preorder his obviously upcoming debut album!

The hop on hop off bus takes you past iconic sights such as the distillery district, Kensington Market and the Bata Shoe Museum that exhibits more than 13,500 pairs of shoes from around the world.

Also we spotted this incredible doggy fountain. I’ve added it to my Pinterest board for when it comes to landscaping my next garden.

As it was pretty late when we got through the hustle and bustle of the city the tour promptly ended at the depot, which, you guessed it, was completely the opposite side of the city from where we were staying. Not to worry, with my new snazzy walking sandals it’d be a breeze. Remembered my seven P’s there!

Halfway on our trek home we hit Chinatown. It was a sign! Time to devour some more delicious food. As with all Chinatowns I’ve ever visited, there were row upon row of restaurants and cafes. We opted for one that was pretty busy and full of Asian diners. Winner!

Call us boring but we avoided the fish heads, pig intestines and various types of tongue on offer and opted for some delicious, more familiar dishes. I’d highly recommend this place. It was yummmmmmy and pretty affordable too.

Our twelve hours in Toronto City was a success! We’d seen as much of the city as we could in such a short time and even squeezed in a visit to one of the city’s plentiful Beer stores. Proper locals we are now.

We stayed in an Airbnb in Bathurst Street.