The latest word on the travelling grapevine was, ‘You have to go canyoning in Dalat. It’s amazing!’ Not one to ignore recommendations from fellow travellers we rechecked the calendar and managed to squeeze in two nights and a day in Dalat.

Please note: As the journey to Dalat was far more amusing than the canyoning itself, this post is heavily focused on the trip itself. You’ll only find a small section about canyoning at the bottom. Apologies if that’s up your street, I was two blocks over.

The seventeen-hour sleeper bus was, to say the least, an emotional rollercoaster. We’d decided to take Phuong Trang, the local bus instead of the tourist bus as, obviously it was cheaper (good news for the tight budget) and it also meant we didn’t need to change buses at Nha Trang at silly o’clock.

We’d looked up reviews of the local sleeper bus and were bombarded with negative comments: limited stops, no on-board toilet, drivers not speaking English blah blah blah. We’d heard it all before.

As the only westerners on board we got quite a few looks as we clambered into our seats. No problems there, by this point we’re used to being the centre of attention and posing for photos with Asian women.

Despite having no toilet, the bus had all the on-board facilities you could need including fully reclining seats/beds with a pod for your legs and bags. Only downside, this bus wasn’t built for westerners. Even little old me at 5ft 5″ didn’t stand a chance of getting my legs in. 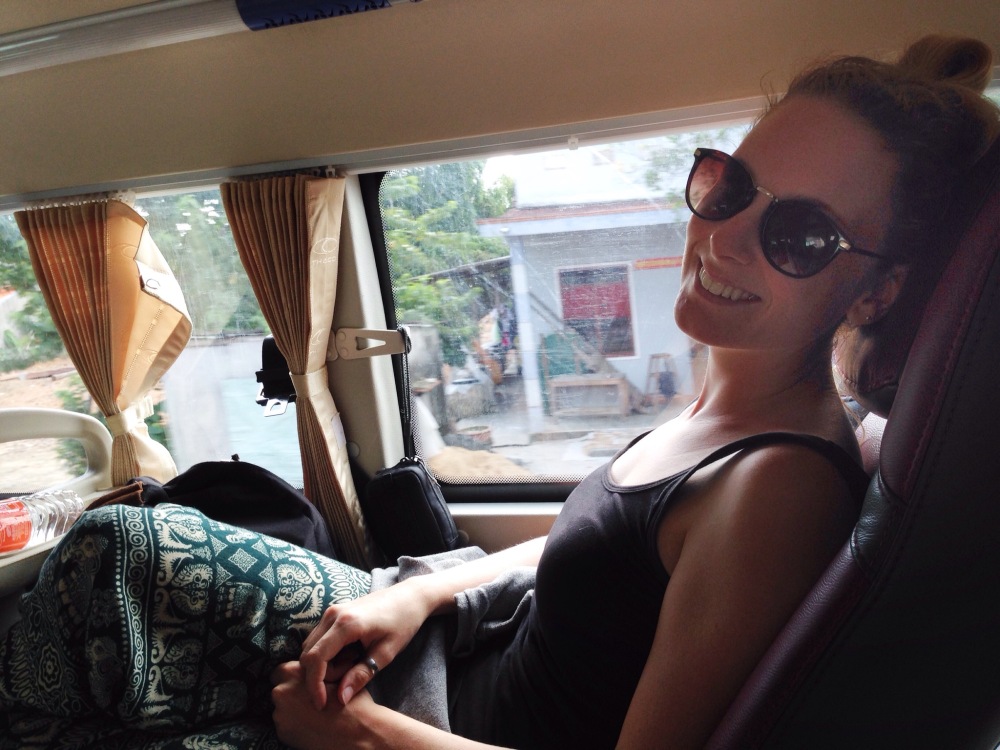 The next seventeen hours were comical.

Please note: For me, travelling around Southeast Asia is a culture shock at every turn. My highlights below aren’t negatives, but simple observations. I quickly learnt that unless you embrace the world around you, you’ll hate it.

Here are my highlights:

• Peeing on the side of the road
We knew there was no toilet on board, but what we didn’t realise was that the usual toilet stops, petrol stations, truck stops etc… were also off the cards. Relieving myself on the side of the road alongside a bus full of people was… an experience. At least I wasn’t wearing a jumpsuit like Kate, who was forced to strip to her underwear every time we stopped.

• The interesting choice of lighting
As soon as the sun disappeared about 6pm, the bus became illuminated with a red glow. Rather than being relaxing, which I guess was the intention, I felt like we were sitting in a giant microwave. 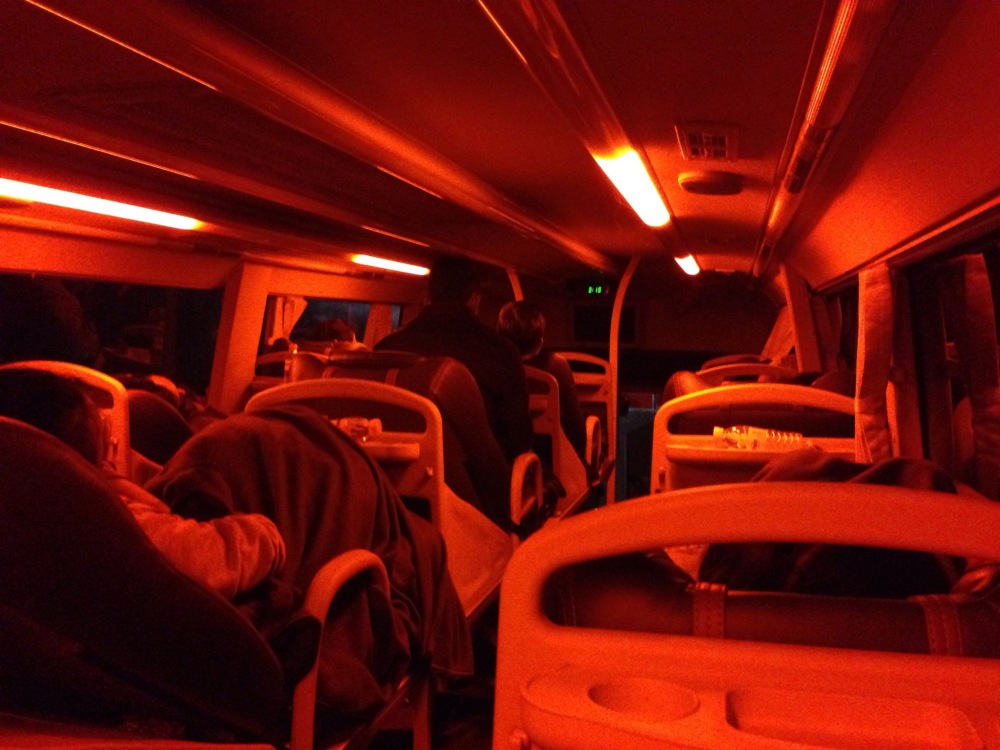 Not to worry, two hours later and the red light was replaced by blue. Turning the bus into some sort of fly catcher. At least it was a nice backdrop to the Top Gear Vietnam Special.

• Germ’ilicious
How none of us became sick after than overnight journey was a miracle. If the locals weren’t gobbing into a bag, they were either coughing or sneezing. They clearly don’t have the ‘Catch it. Bin it. Kill it.’ slogan here either. My mum would be appalled.

• Uncourteous locals
The name ‘sleeper bus’ clearly defines the purpose of the vehicle: a bus to be slept on. Apparently the man two seats back hadn’t got the memo as he quite happily went through all of the ringtones on his Nokia 3310 about ten times.

• Fluctuating temperatures
I truly believe bus drivers get a kick out of playing God with their passengers; mostly in the sense of messing around with the master air-conditioning switch. One moment you could be mistaken for thinking you were in the Arctic, then you blink and you’ve been transported to the Sahara. Incredible really.

• The driving
By now I’ve got used to the driving out here and it isn’t so much of an annoyance, but more of an amusing act to observe. It’s a fact that drivers do not like sitting behind other vehicles; If there’s another vehicle within sight, the driver will make it their mission to over take it. There are also no rules. Driving on the other side of the road, overtaking on a bend, slamming on the brakes when even they think it’s too much of a close call are not uncommon. Any journey by bus or car is like stepping into Wacky Races, anything goes.

• The local food stop
Stopping at a local bus station come restaurant has to be the highlight of the seventeen-hour trip. After the driver announced something in Vietnamese, everyone got up and off the bus. Thinking he’d come back on and explain what was going on, we sat in our beds patiently, just looking around. Five minutes later we decided to take things into our own hands and leave the bus. After trying to ask how long we had and failing miserably, we clocked some people on our bus and decided to discreetly follow them.

After visiting the communal ‘toilets’ we ordered some food by pointing at the man’s plate next to us. No idea what it was but it was pretty good and incredibly cheap!

When the people on our bus gathered their things and headed back towards the bus, we followed. In the ten minutes we were stood outside waiting for the driver, we were soon surrounded by a group of older local ladies. They clearly don’t get many westerners visiting. After having my face stroked and nose stud prodded by the group of women I was thankful to get back on the bus. Better the devil you know.

We travelled to Dalat with Phong Trang. I’d highly recommend it. It’s cheaper and quicker than the tourist bus, plus it’s another adventure to tell the grandkids about. A ticket cost us 442,000 dong (approx. £13.20).

As canyoning is pretty much the only thing to do in Dalat, everyone you meet in your hostel will have been, or will be going. It’s always fun to chat to people about their experience of the day.

The trip is full of abseiling, rock climbing and cliff jumping, including a famous 11m cliff jump. Not famous for the height, but the fact that willing jumpers have to clear the protruding ledge a couple of metres below the edge.

I’m sorry to say that I didn’t attempt the 11m jump. I did however jump from the ledge at 7m. My first ever cliff jump – it was a proud moment!

Even though I won’t be taking up canyoning any time soon the day was good fun and I’d highly recommend it. 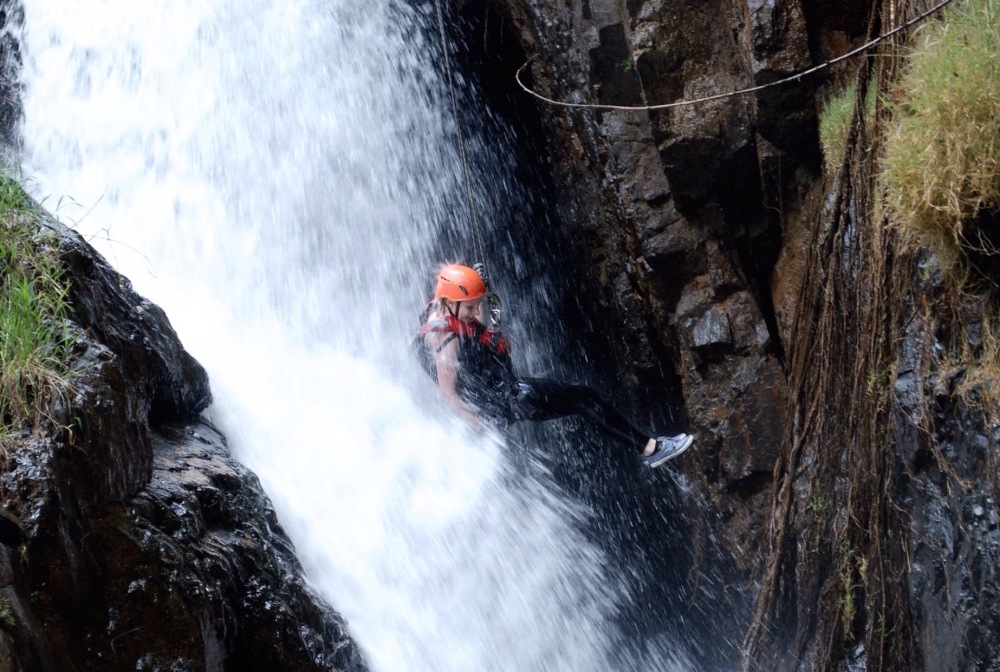