We’d heard the slow boat from Chiang Mai was an experience not to miss and as I sit writing this from a sweltering, cramped and noisy boat I would agree.

We were sold a slow boat to Luang Prabang by an agent who didn’t seem to know much about it, however feeling reassured we booked it up and waited for our departure…

Welcome to our slow boat adventure

It’s not uncommon for things to run behind schedule here. We’ve quickly learnt that about ‘Thai time’. Unless you’re over an hour late, you are in fact on time. So when a pickup truck finally arrived at our meeting place 45 minutes late, we weren’t preturbed.

We hauled our rucksacks and ourselves into the back of the pickup and started praying that this wasn’t the five-hour transport to the border. I remained optimistic that it was just our ride to the main bus and thankfully it was!

The minibus journey was pretty uneventful, the driver of course drove like a mad man, I’ll forgive him though as his playlist was so good. You can’t beat a bit of Destiny’s Child followed by One Direction.

As the slow boat takes two days it means staying over night at accomodation along the way.

One of the boys had Trip Advisor’d the hostel we were staying at and by the look on his face I’d asked not to hear any more. From the stories we’d heard I knew it wasn’t going to be the Hilton.

Boom House hostel was… basic. I think that’s the nicest way to put it. Although if I was being honest, I’d probably describe it as dire.

The room did however have an award-winning sink. First place for worlds most useless sink goes to…

I didn’t notice this plumbing malfunction until I came to brush my teeth and my newly minty feet got a shock.

On the plus side there were indeed beds (which after cocooning myself in my sleeping bag liner weren’t all that bad) and a pretty decent shower (even if the bathroom door didn’t shut).

Our saving grace, we were only there a grand total of six hours.

The morning quickly came around and after a briefing about what to expect at the border, we once again got piled into the back of a pickup van and headed towards the border crossing.

You hear horror stories about the Laos border crossing but we breezed through. There is a hidden cost of 20 Thai baht for the shuttle bus which drives you over the border but apart from that, the visa was a set price depending on which passport you held – $35 for a British passport.

The whole process took about an hour and a half and once we had our visas we were free to go. We checked-in with the company who would take us by bus to the port and the guy spoke to us about what would happen between now and our final destination of Luang Prabang.

That’s when we realised that there was a second stop over, in Pakbeng. Thanks to our lovely but ditzy travel agent we hadn’t been informed of this and hadn’t booked anything up. After five minutes of panicking and stressing out, realising we’d booked and paid for a night in a Luang Prabang hostel we wouldn’t use (this wouldn’t help the budget!), the guide suggested a guesthouse and along with pretty much everyone on our bus, booked it up. Safety in numbers I guess.

He gave a speech about how he would help us have a ‘happy time in his country’ and told us about the more common scams: transfers dropping you in the middle of nowhere, tourist shops mis-selling things etc etc… At that point little did we know that he was basically telling us exactly what would happen to us during our week in Laos.

When the time came to board the slow boat, we all piled on in a Tetris style manner. It started off well, bags being strategically placed in the hold, but as more and more people boarded, it turned into a mad panic and bags were being thrown all over the shop. 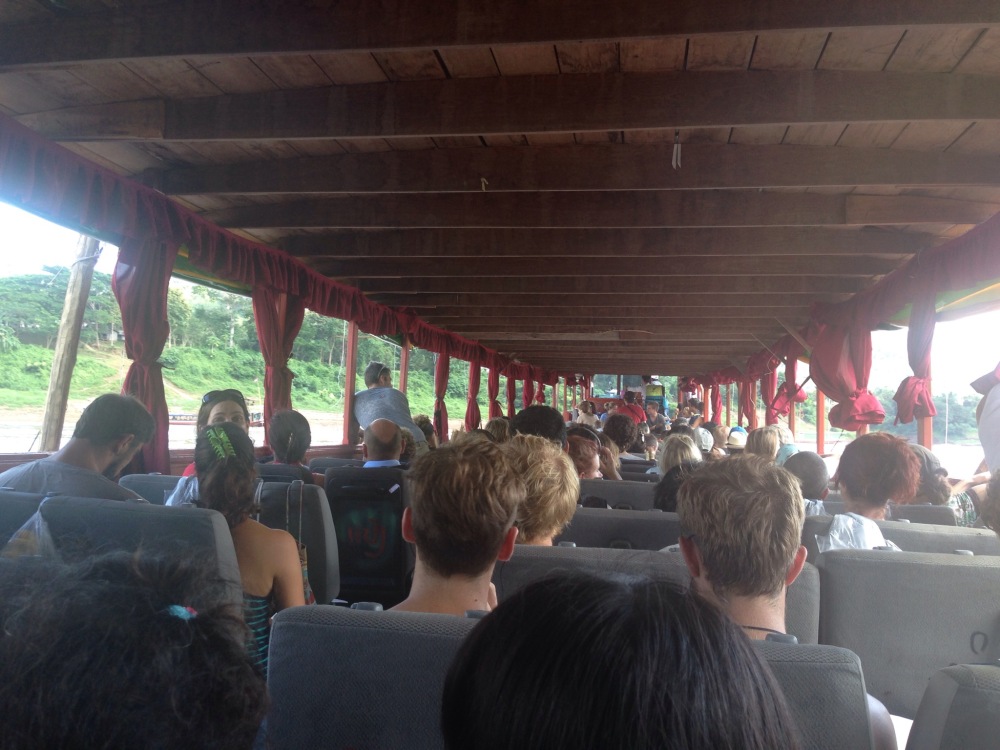 There was no organisation, no direction and seat reservations were out the window. Meaning we were to spend the next six hours being deafened by the open engine just a few feet from our seats. On the plus side at least we had seats! There were quite a few people who were subjected to sitting in the aisles or in the luggage room.

Mental note: Must get to the boat super early to get decent seats.

After a pretty decent nights sleep we were up and out early ready to secure our seats on the boat. We vaguely remembered hearing someone say the boat was due to leave between 8:30 and 9 so hot footed it down there for 7:30.

It seemed that other people had had the same idea and with the seats already littered with rucksacks, the boat resembled more of a German holiday resort. We were however lucky enough to get decent seats, away from the noise of the engine.

The next nine hours were a display of stunning Laos beauty; lush forests, grazing animals and waving locals.

The final hurdle came at precisely 4:30pm when we were swiftly chucked off the boat. Quite literally, our bags were thrown from the hold onto the makeshift pier.

Cue scam number three; we had to fork out more money for a tuk-tuk into the city, 10km away.

The slow boat may have taken longer than a flight, but I’d highly recommend it to anyone looking to get from Chiang Mai into Laos. Think of it less as a two days wasted day travelling from A to B and treat it as an experience.

There’s scams galore so keep your wits about you. I agree it wasn’t the most friendly first impression of the country but it was blooming beautiful. 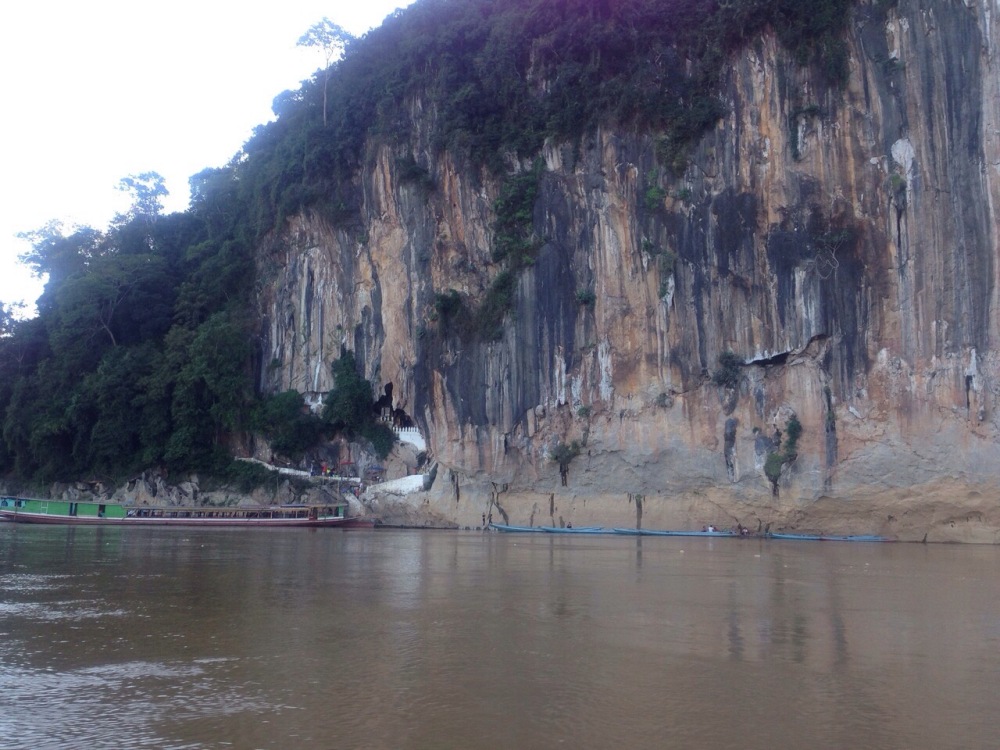 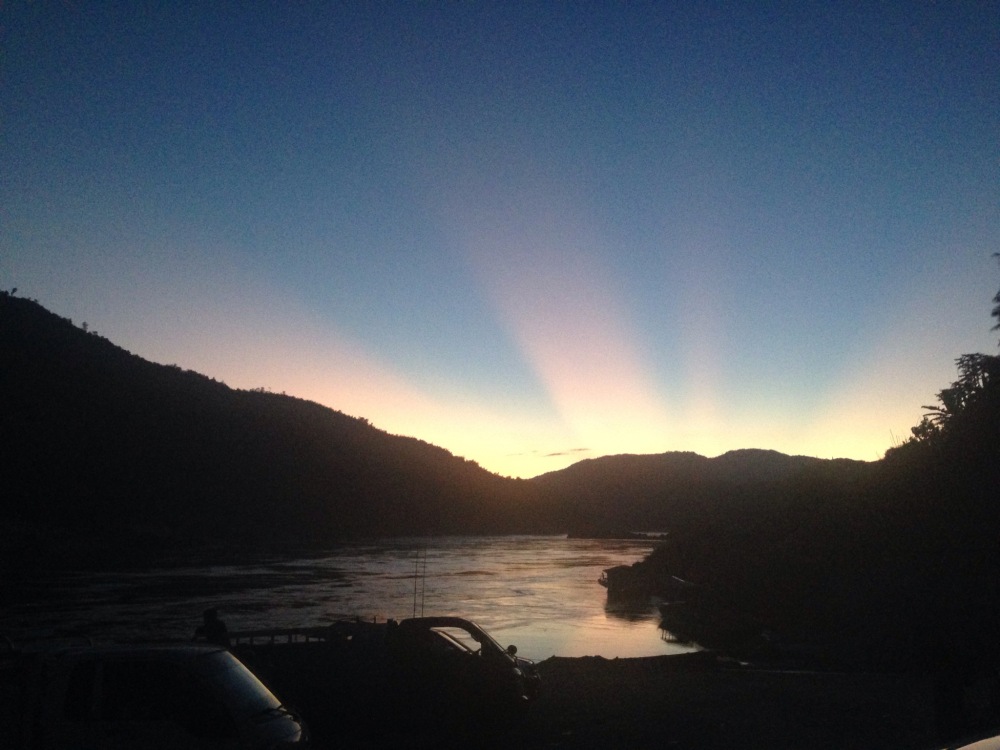