So who wants to come and live in Chiang Mai with me? It’s amazing – no wonder so many ex-pats make it their home from home.

We only spent five days here, but could easily have spent another week. There’s just so much I wanted to do: white water rafting, Muay Thai training school, trekking, zip lining, elephants, cookery lessons, hill tribes… The list goes on and on.

After chatting to some fellow backpackers we decided on white water rafting and zip lining, so spent our first day in Chiang Mai hunting down a bargain.

By this point I was quite happy to have a quiet day, meandering from one air-conditioned tourist office to the next. After two wonderful weeks I’d contracted dreaded Asia belly… Feeling rather worse for wear I let the guys barter their way to a bargain.

You know that age old saying, third time lucky? Well I’d say we made it to at least five tourist shops before we shook hands on a deal.

After agreeing on a price we ended up spending £100 on:
– A day zip lining
– A day white water rafting
– A bus to Pai
– A slow boat to Laos

Not bad at all, but thanks to my tight budgeting it did mean that I ended up living off about £2 a day. Which luckily isn’t too bad here thanks to all the amazing street food. An evening feast costing less than a pound. 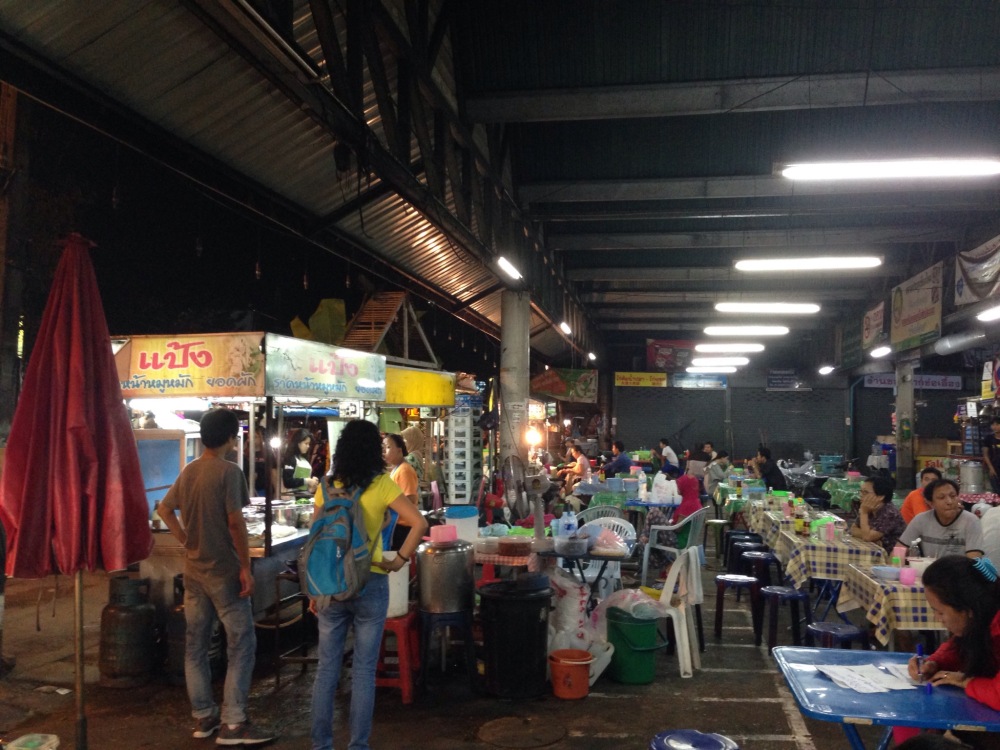 If like me you find yourself hankering after a meal sans noodles or rice, there’s a great burger stall at Chiang Mai Gate (South gate), called Echo Burger, where a cheese burger will set you back about 80p. Probably the best burger I’ve ever had. 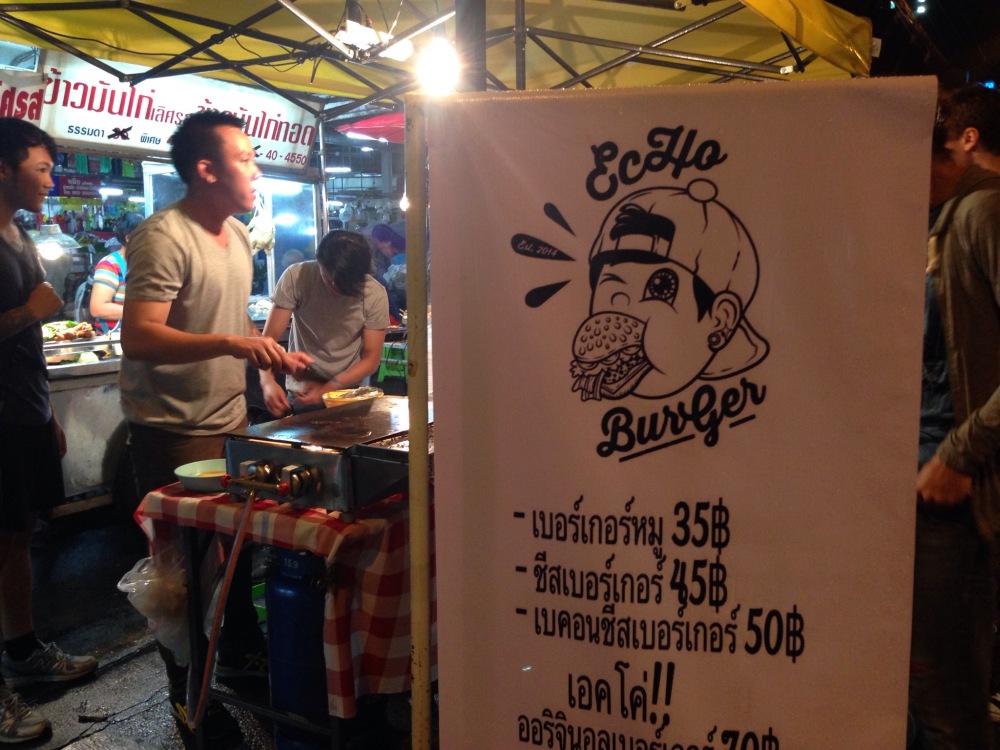 Up in Chiang Mai, you’ll see advertisements for zip lining everywhere and the main name on the street is a company called Flight of the Gibbon. It was one that had been recommended by a number of people, but not one to conform to the norm we opted for a less-cooly named Flying Squirrels. It took place in roughly the same area, had more zip lines and was around half the price of Flight of the Gibbon. Deal breaker.

Still feeling rather worse for wear and with rain bucketing down on the drive in, I wasn’t sure flying through the trees was the best idea at that moment in time… How wrong could I be?

Two hours later we were drenched, but had the biggest smiles on our faces. The guides were brilliant, the views were incredible and the complimentary Thai buffet was delicious.

With Thai health and safety laws being as they are, pretty lacks to say the least, we did our research on this one… I for one didn’t fancy just being handed a paddle, shuvved in a boat and pushed down stream whilst a group of Thai men shout at you to smile at the camera. I’m not a big water fan at the best of times and in a situation where I was probably going to end up overboard, I was taking no chances.

We decided on a relatively new company called Rocky Road Adventures. Their accident rate was super low, probably due to the fact they hadn’t been around that long… After signing waivers and insurance forms (thank goodness I’d got my own super duper insurance, theirs didn’t seem to cover that much) we were set.

Time to don the life jackets and helmets. Thanks to my pea head, even the smallest helmet was slightly too large. After a quick adjustment of my hair and tightening of helmet straps that can only be compared to ‘the dreaded pinch’ you experienced as a child whenever a parent fitted your cycle helmet properly, I felt a little safer.

We had a ten-minute briefing about the instructions our guides would be yelling at us. Much like my surfing experience, they all seemed pretty simple… on land. Paddle, turn left, turn right, get down. Sorted!

I was still really nervous when it came to finally getting in the boat so suggested the boys go at the front to lead the way as it were. Wedged in, the guide pushed off from the shore and started shouting instructions.

Being the competitive soul I am, and also majorly missing a good workout in the gym, I put my all in. Guide shouts ‘Paddle!’, I hear ‘engage core, power through the upper body, full range. Go go go!’

Has to be said the boys took a more Pocahontas-style approach which amused our guide greatly – ‘You no power. You like lady boy.’

Two kilometres down the river we stopped and it was all change in the boat and I got my first taste of being at the front of a raft. 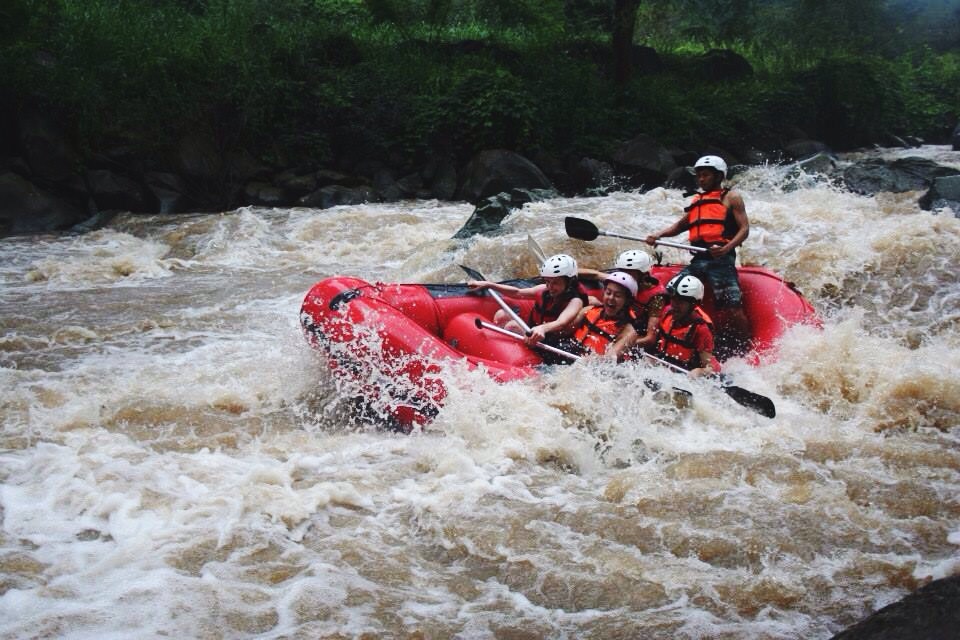 One person fell in that day and obviously that person was me. We’d been taught what to do if we fell in but as soon as I hit the water that all went to pot. All I could think was lenses lenses lenses!

It’s all good though, not only did I survive to tell the tale but I finally found an outdoor sport I could literally submerse myself in.

To say ‘I’m just a dog person’ is an understatement, the honest truth is I don’t like cats. I put it down to pretty much every cat I met as a child scratching me – maybe if cats wore mittens I’d feel differently. Anyways, as one of the group is admittedly kitten smitten, we made it our mission to find Catmosphere – the world’s first space cat cafe.

One of a handful of Chiang Mai’s cat cafes, Catmosphere, which only opened this year, stands out in the crowd with their space-themed decor and aptly named cats: Buzz, Leia, Obi Wan and Luna. 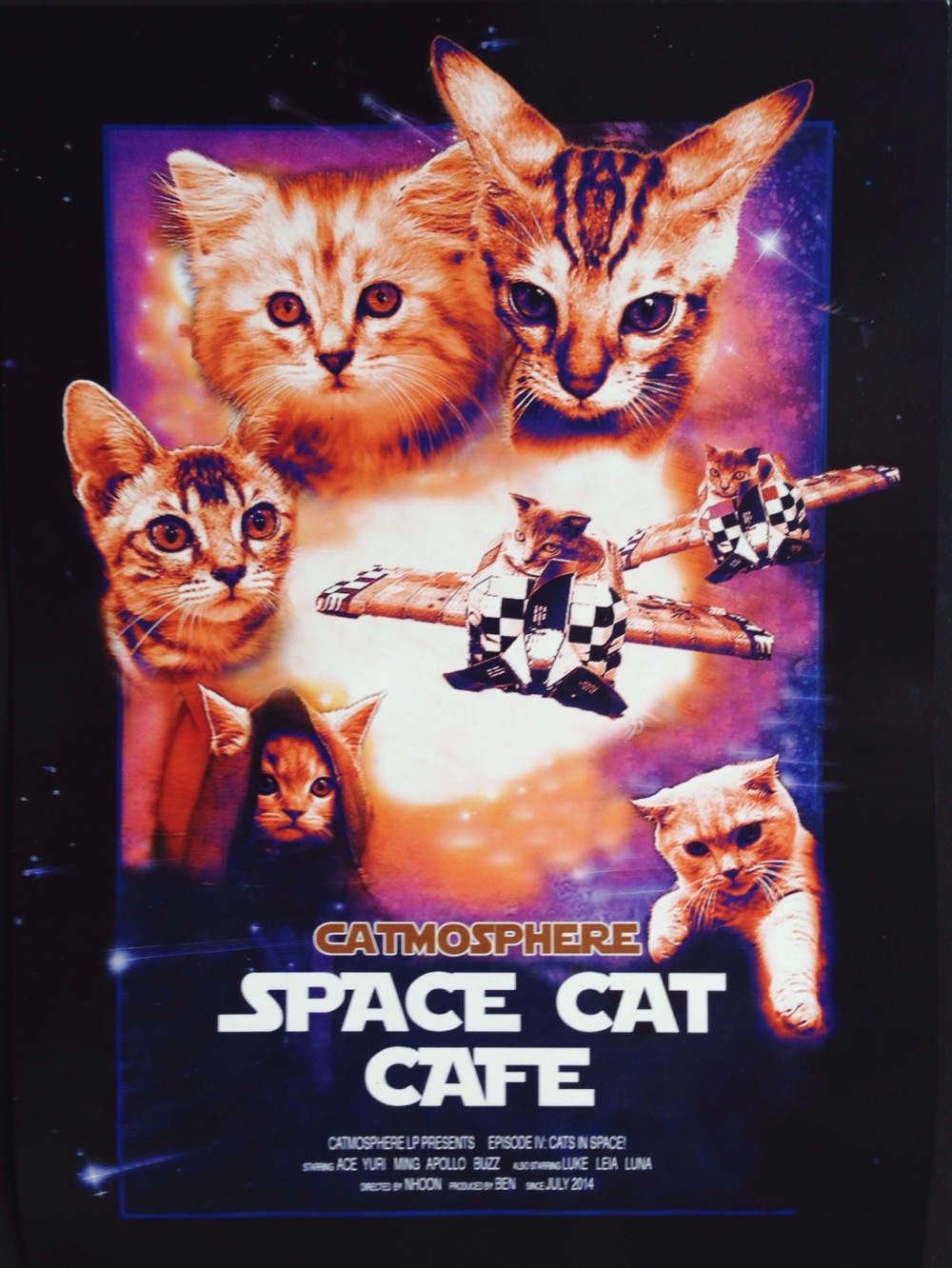 After a 5km from town, I wouldn’t recommend doing this in the heat of the day like us, we arrived at the cafe, to be greeted with a queue and a minimum hours wait…

Once we were finally let in, we took our cushioned seats and were directed to the ‘cat rules’, the first one being don’t pull the cats tails or ears. Now personally, if you’ve made the effort to hunt this place down and queue outside, I don’t think doing this would even cross your mind. Better safe than sorry though I guess!

Anyhow, we ordered our drinks and waited patiently for the unamused cats to come play. It was quite funny watching people crawl about on their hands and knees trying to entice the cats with a host of cat toys. They weren’t bothered. Most spent the entire time asleep, the others climbed up to their hiding place or simply sat with their backs towards you. Hillarious. 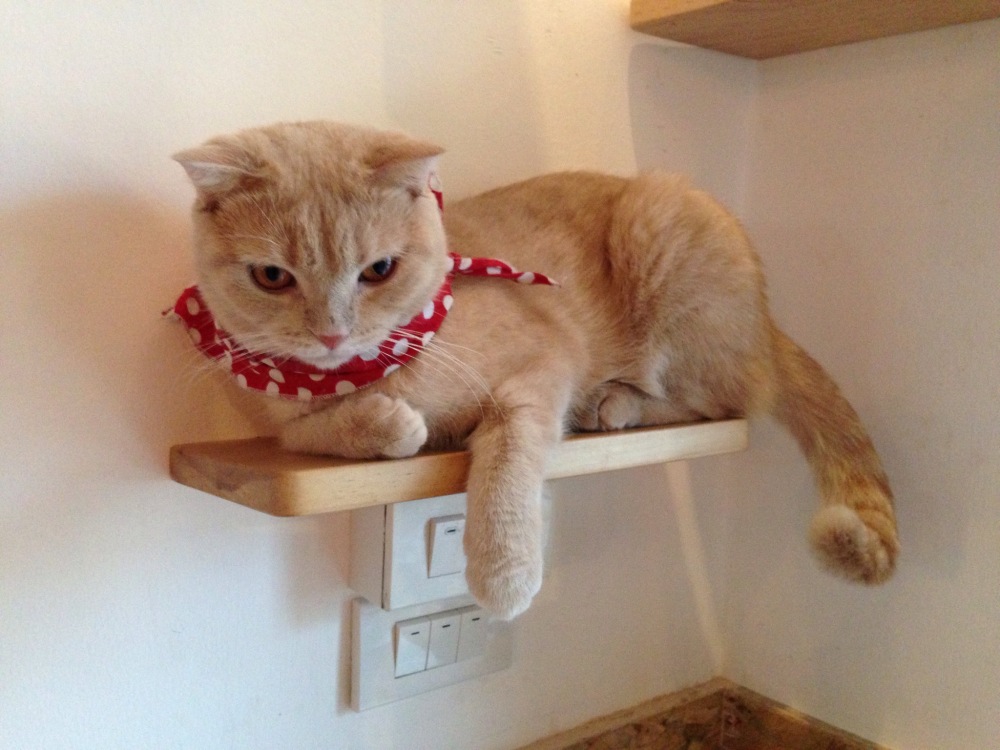 Ten minutes I joined the other cat lovers on the floor… After all, if you’re not playing with a cat, you’re simply sat drinking an overpriced coffee in a place full of nutters. 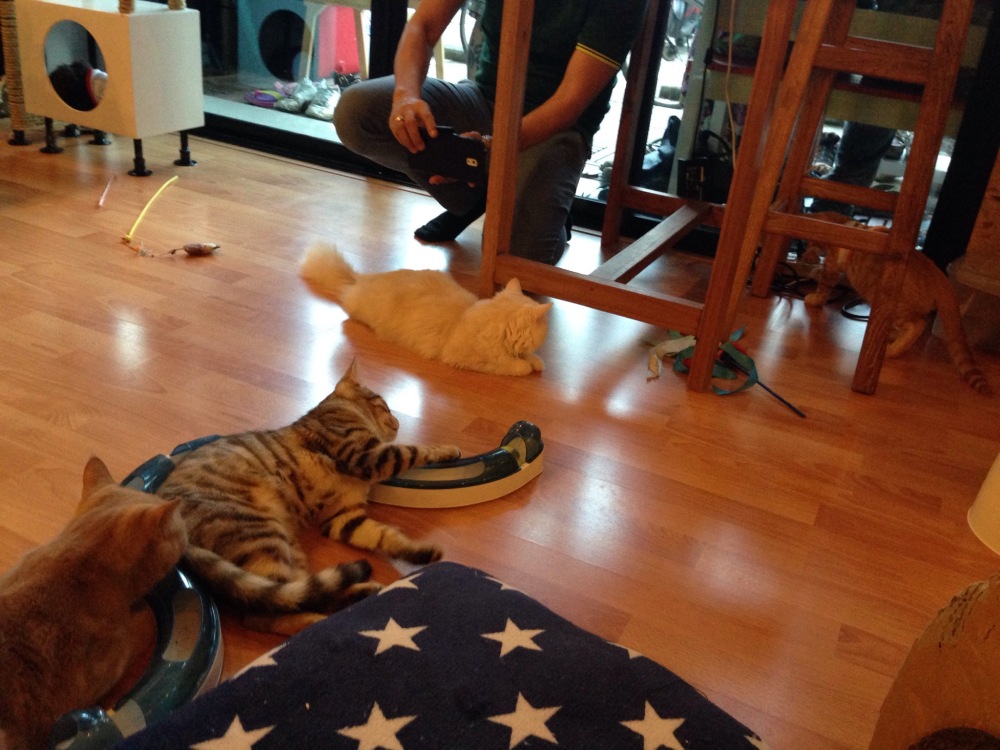 I always suspected visiting the Yi Peng festival would be one of my highlights of Asia, so we’d timed our visit especially. Making sure we were there for the last three nights of the festival.

Yi means “two” and peng means a “full moon day”. Yi Peng refers to the full moon day in the second month according to the Lanna lunar calendar.

As soon as the sun went down, the sky became alight with thousands of paper lanterns, floating above the city in golden streams. It was beyond beautiful. 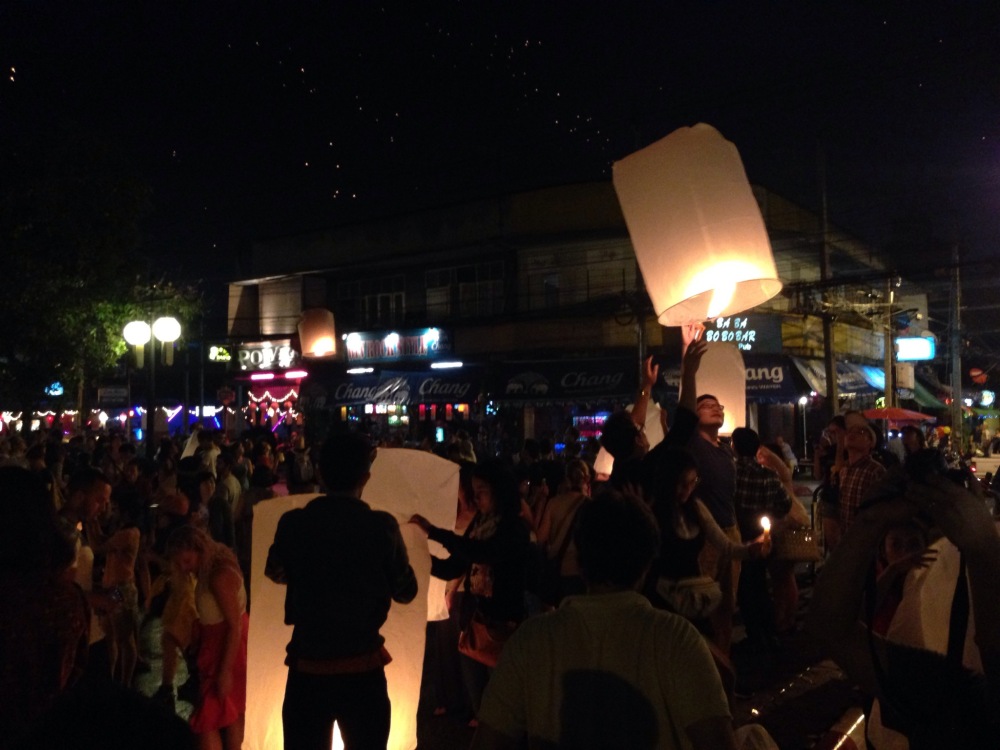 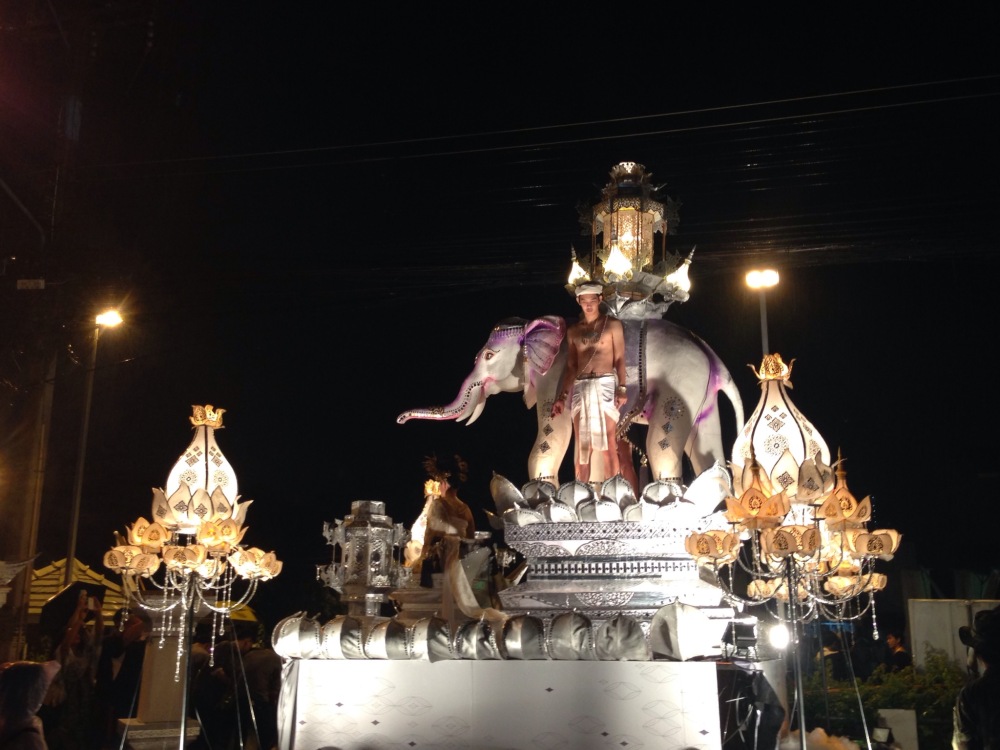 For those three nights the city came alive with concerts, processions and even a very popular Mr Yi Peng contest! 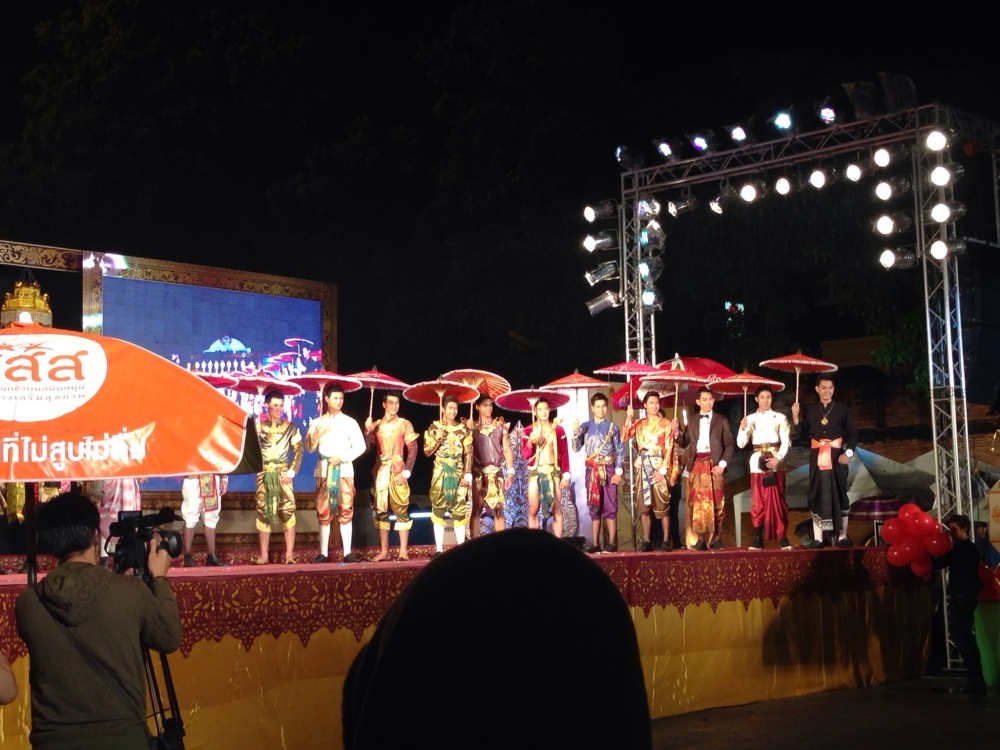 We decided to save letting off our own lanterns until our final night, which also marked the end of the festival.

Please note: When letting off sky lanterns two things are very important: a sky lantern and a lighter.

In true style, we had neither.

After spending the week seeing thousands of lanterns for sale, would you believe that the one night we want to set them off, we couldn’t find any. I’d say it was a good hour before we came across a lone woman who fortunately just had enough left.

Standing on that bridge in Chiang Mai with the warm wind on our backs, watching our lanterns float away into the night sky is a moment I’ll never forget. 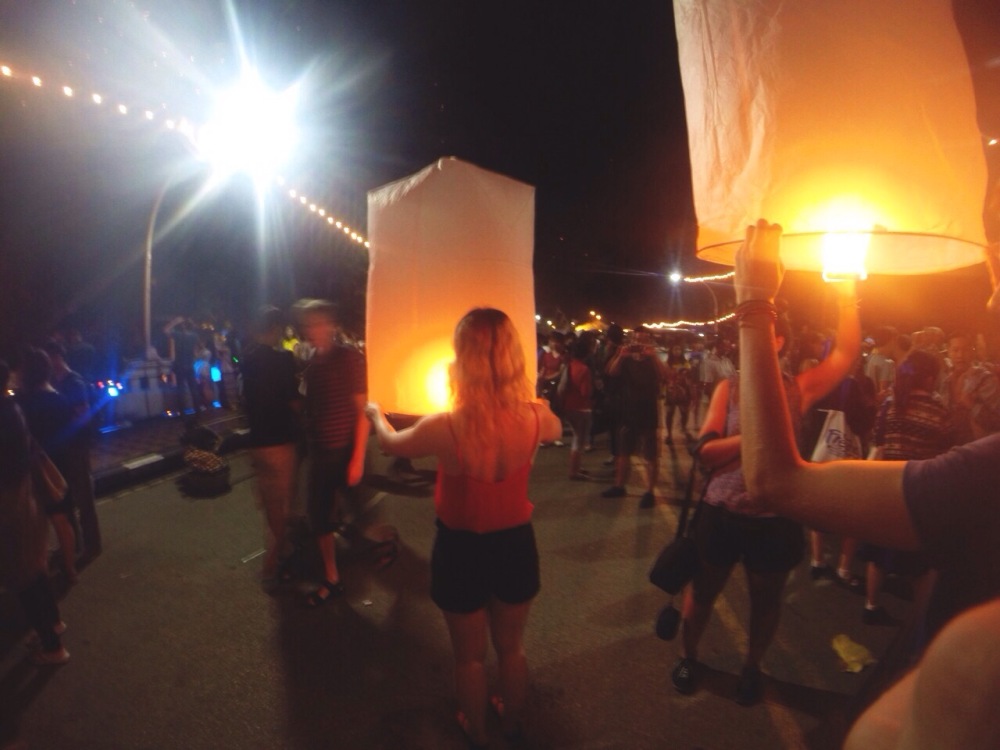 Highly recommended! The place is beautiful, the staff are lovely and the beds are comfy. Not to mention there’s a pool. Too bad we never got to use it, damn storms!