Set in the Mondulkiri province of Cambodia, The Elephant Valley Project is a sanctuary set up for elephant care and local employment.

The project sees a number of people visit and volunteer, from a couple of days up to a year. As we’re on quite a tight schedule, we chose the two-day Taste of the Jungle package which included one day of elephant trekking and one day of volunteer work at the valley. This was broken down by trekking on the first morning and volunteering in the afternoon. Then volunteering on the second morning and trekking in the afternoon.

I didn’t really read up too much on what we’d be doing. All I knew was that we’d be seeing elephants and in a place where they were safe and happy.

It’s a dream of many to come to Asia and ride an elephant, but the more I researched it, the less I wanted to do it. That’s why we opted for an elephant sanctuary. The team and local people are dedicated to give the elephants a happy life and I wanted in.

The project currently has 12 elephants which roam their 1,500 hectare valley. Some are there on a temporary basis, respite from their daily jobs or to recover after being unwell. Others are here on a permanent basis, a bit like a retirement community for elephants.

The project works closely with the local community and the elephants owners. Each year, one member of the elephants family comes into the project as their elephant mahout, or master. For their efforts in caring for their elephants and making sure they don’t wander into the surrounding rice farms for an afternoon binge, the mahouts earn a decent wage which benefits all.

On the first morning we met five elephants: Ruby, Onion, Pearl, Ning Wan and Milot. For once I can’t put into words the feeling of watching four majestic giants emerge through the trees towards you. With no chains, the elephants were free to roam as they wished.

Throughout the morning, our guide Chris told us all about the culture of the Bayong people and the elephants we were trekking with. One of which had been mistreated by her owners whilst working for a sawmill.

He pointed out the scars and marks on the elephants, evidence they had previously been mistreated. 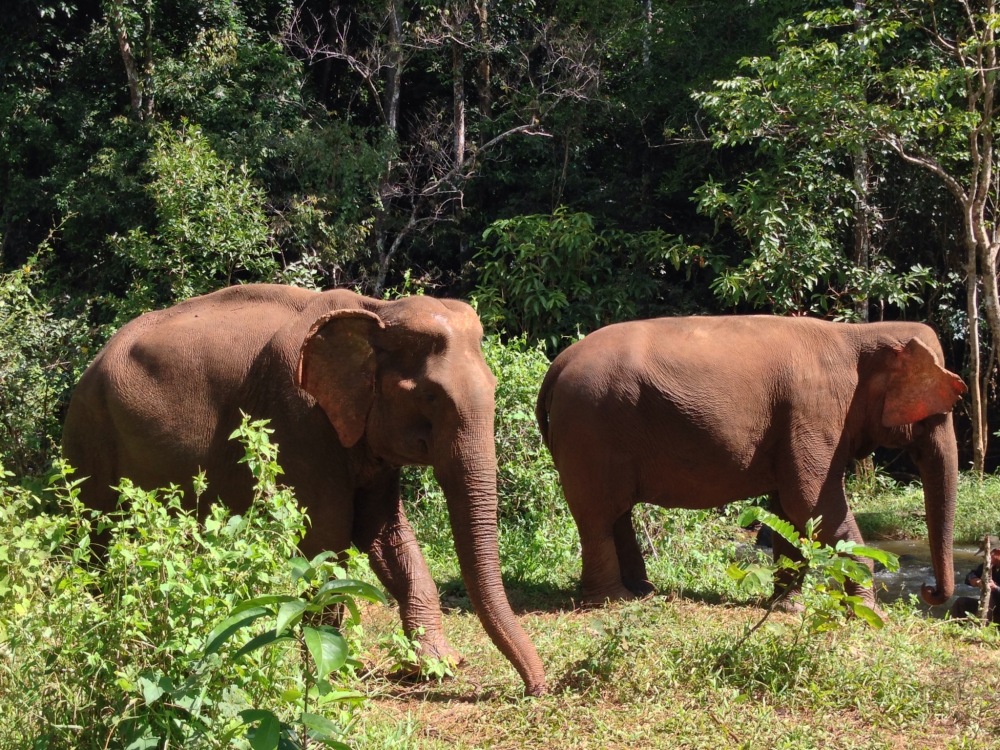 For example, the picture above shows two of the ladies we were trekking with that day. An elephants spine and ribs should be in line, like the elephant on the right. In comparison, the ribs of the elephant on the left are much lower than the spine. Evidence that during her life, the elephant was made to carry heavy items on her back, for example a basket for elephant rides which has forced her ribs down. Permanent damage that will never repair itself.

I have to admit that until coming here, I thought elephants were fearcfully strong and could carry large weights without problem. This isn’t true. A full grown Asian elephant can only carry about 90kg safely on its back without causing pain and skeletal damage. The reason why you’ll see an elephants mahout sit high on the elephants shoulders.

We spent the morning trekking through the jungle with the elephants and their mahouts. We even got to see them have their morning bath. 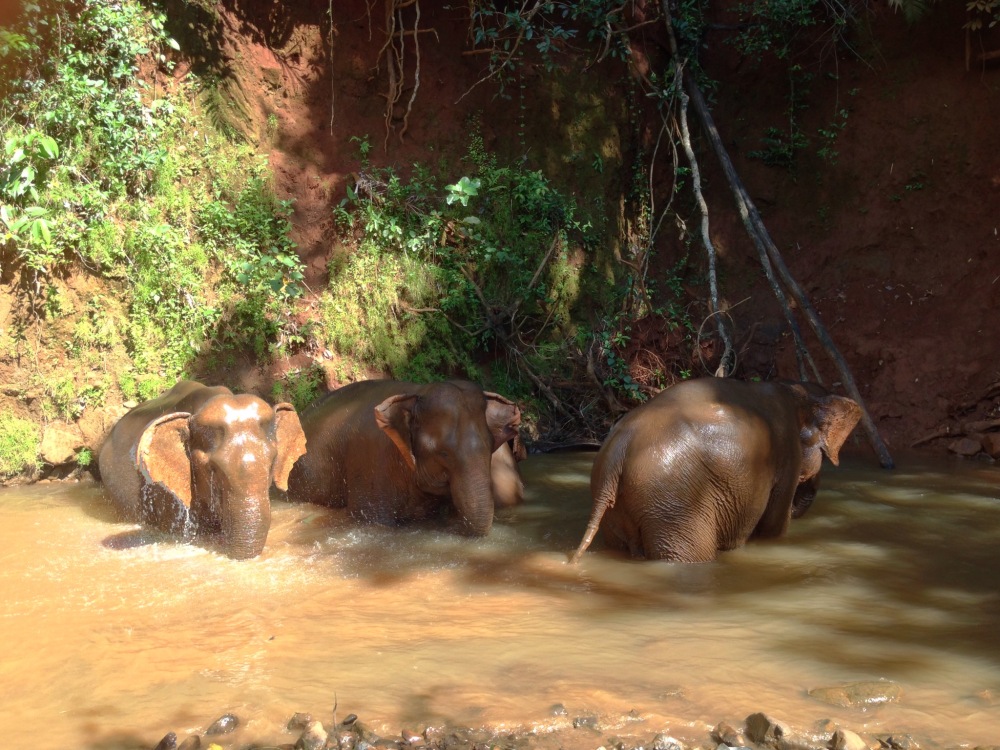 After a wonderful lunch, we headed out into the valley for an afternoon of volunteer work. Armed with machetes and hoes, our job was to clear an area of land for the avocado farm. After a few failed attempts with the machete, don’t panic everyone still had all their limbs, we finally got the hang of it. In fact we got the hang of it so well that we also got to help cut down two banana trees for the elephants breakfast.

I always assumed a banana tree had a solid trunk. In fact it’s made up of lots of layer which look like honeycomb. I never fancied myself as a lumberjack, but that afternoon as the five of us chopped and carried the banana trees back up the valley, it was hard to keep the smiles off our faces.

7:00am came around quickly and we set off for our second day on the project. This time our volunteer work was taking place on the morning. With the sun beating down we grabbed our tools and set off up the other side of the valley, all secretly hoping we would be cutting down more banana trees.

What do you know? Our job that morning was to tidy up the banana and pineapple farm. Removing the dead leaves and chopping down dead banana trees.

Please note: Banana trees only fruit once, after this they die off, get cut down and two banana trees grow in its place. Now there’s a thoughtfully sustainable plant is ever I saw one!

We weren’t ‘lucky’ enough to see any snakes that morning, but we were witness to a few giant spiders and thousands of mutant ants. Again, with smiles on our faces, we got the job done. I think knowing that the work you’re doing directly affects the project and the elephants really does help.

The blisters and the dirt on our clothes were all worth it, when that afternoon we trekked with two more
elephants, Easy Rider and GeeNowl.

We were told that these two elephants were famous for keeping their mahouts on their toes. After the slower ladies we followed yesterday, these two seemed to be running along.

I couldn’t get over how beautiful and graceful they were, despite their size. Which made me feel better due to the fact that during my childhood years of ballet school I was once described as being ‘as graceful as an elephant’.

We did get a rest when Easy Rider and GeeNowl enjoyed their afternoon bath. Allowing us to enjoy our front row seats, at the top of the waterfall. 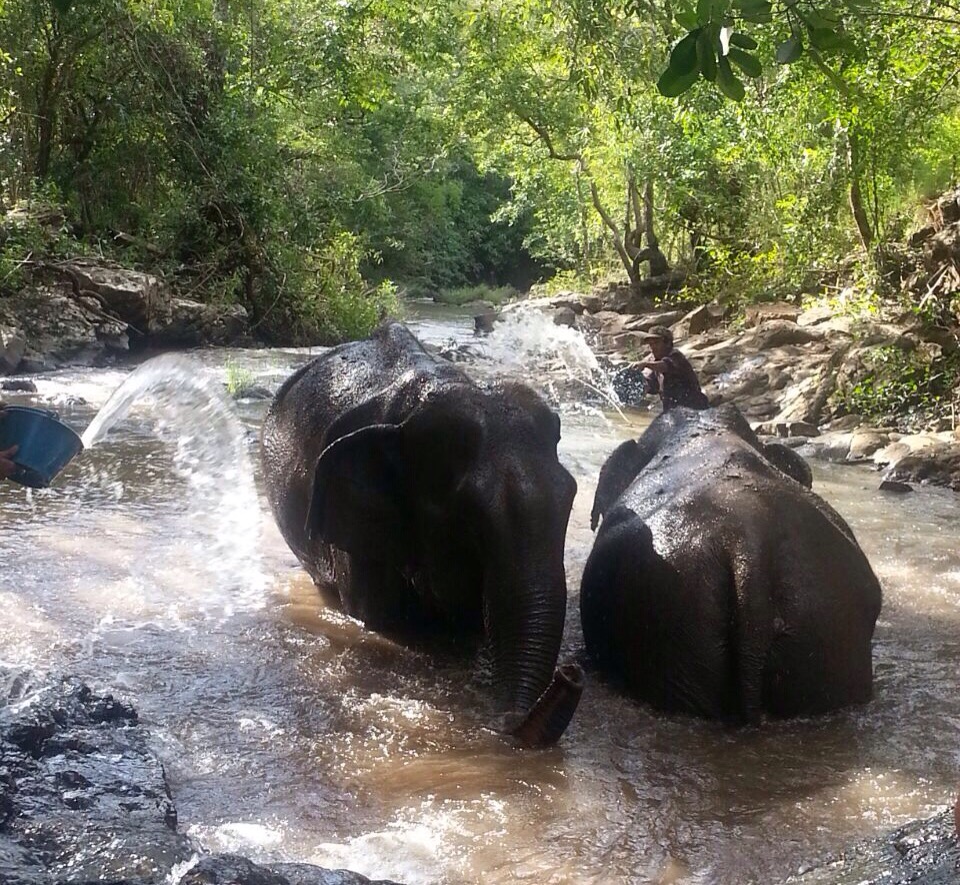 I’d like to say thank you to Chris, Jemma, Ruth, Jack and Hannah for having ‘Vicky plus 3’ at the project.

If you’re visiting Cambodia or just love elephants like me. You can volunteer at the Elephant Valley Project on a short or long term basis. The team that work there are incredible people and are devoted to helping not only the elephants but the Bunong people and surrounding community. It was such an enjoyable and rewarding experience, and I only went for two days!

For more information on the project and the different packages they offer visit www.elephantvalleyproject.org 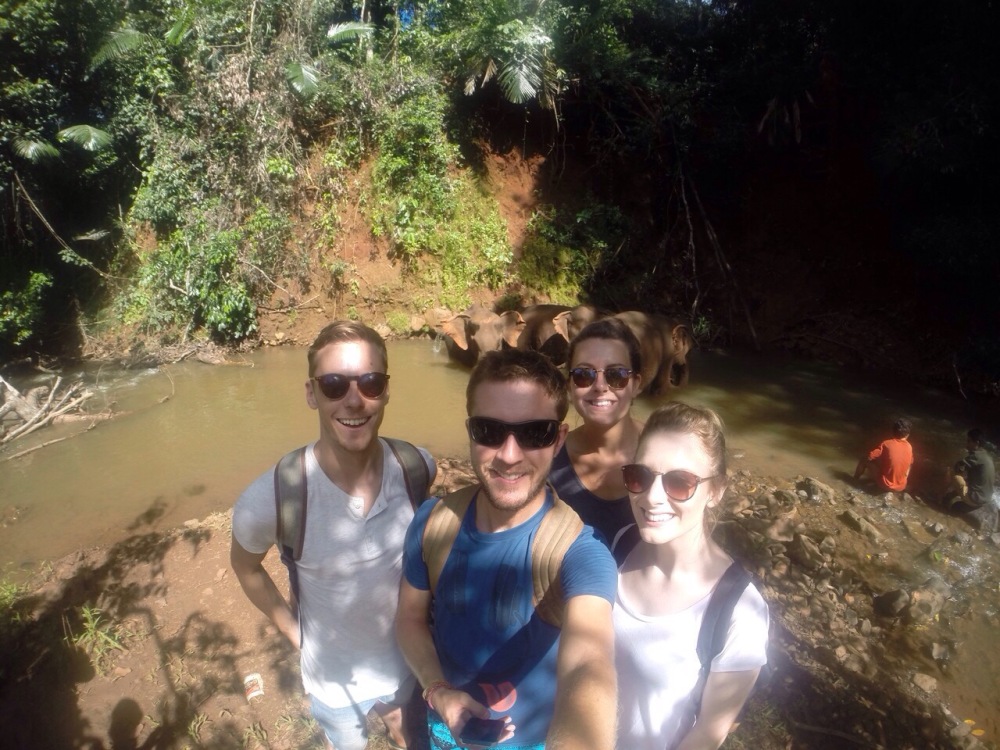